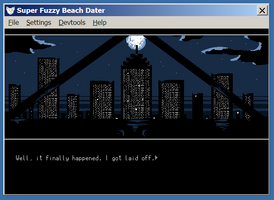 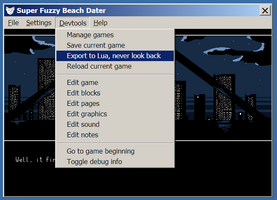 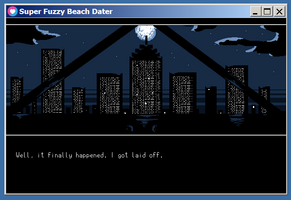 Porting the game's script to the new engine has now begun in earnest.

There's still a lot to do manually, but all of the old script has been exported to a code file that I can copy and paste bits and pieces of into the new script as I please. This is pretty important, because I didn't want to have to rewrite everything I'd already done :p

Currently, the script up to the protagonist reaching the inside of his apartment has been ported. To those of you that have played Demo 1, this may not sound like much, but the new adventure game style gameplay expands upon this a lot. Let me put it this way—this isn't a perfect metric, but when I counted the lines of code, the flavor text I wrote for examining objects in the protagonist's apartment is about half the length of the entire first demo.

The speed at which I can release Demo 2 now mainly hinges on how quickly I can write all the extra script the game now requires, and how much of a crappy GUI you all are willing to put up with. For example, there may be saving and loading now, but you may have to access them with keyboard shortcuts instead of having a fancy menu, and only have a single slot. And rollback/rewind will almost certainly not be in there, but I think having a transcript will be doable. Is this a huge problem?

The only main engine features from Demo 1 I haven't implemented yet are the camera panning and "to be continued" effect. With any luck I won't end up hacking those together a week or so before release, like I did last time :p

My hand still isn't doing brilliant, but with any luck I can keep up a decent pace with development work. For the moment I will largely be occupied with writing the script, but future updates may focus more on the technical side of the game, which I've wanted to talk about more for a while.

Those may be a bit boring, but with any luck, they will function as assurances I'm getting actual work done :p