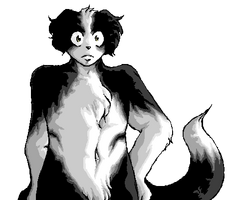 My health is finally returning a bit, and I can use my hand more now. So I took advantage of the opportunity to redraw one of the old character portraits. If I continue to feel good, I'll likely do more through the week.

I realized, to advertise the game, I need to actually draw advertising-specific character portraits of all the main characters.

It's a bit obvious, in retrospect. When looking into a dating sim, what's one of the first things you want to know? What all the seducable characters look like, for one. Until now, I realized, I've actually been doing fairly badly on this front.

The problem is this—a normal visual novel can just recycle character sprites for this. But that's not an option for this game. This game doesn't have character sprites. It has unique pictures for each scene, which I sort of treat like comic panels, and only draw as I'm writing the relevant section. If I did things the normal way, you'd only find out what the characters looked like as I finished each route, which would be unacceptably slow.

So I've got to get drawing :p

I could be rebellious and only reveal who you can seduce as the plot progresses, since the game's arguably going to end up more like an adventure game than a normal dating sim. But I don't feel the need to go against the grain that much. Like, I have some plot twists planned, but so far, none of them rely on hiding whether someone is a main character or not—so there's no reason to not use the game's cast as a selling point, like a normal dating sim.

Besides, this will force me to tackle some art design decisions early, like how to color and shade characters with complicated fur patterns in pixel art. (If you watch the video, you can see me struggle with this :p )

Anyway, with any luck, I'll be able to get more of these done through the week. Maybe I'll be able to write more about the characters as well—that's a little hard to do when there's no recent pictures of them :p