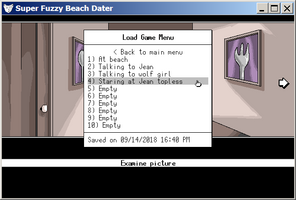 There's some small glitches here and there, but you can now save and load games, and use a text log in SFBD! These were the two biggest features that needed to be implemented before the next demo could be released, so I'm pretty excited about this.

The checklist of things to do now is basically:

Because I keep getting sick, and have to work slow, this still might take a while, but basically, we're in the final stretch now.

It's worth emphasizing that the save games in SFBD work more like an adventure game than a visual novel—you can save during the point-and-click parts of gameplay, but not in the middle of cutscenes. This may change in the future, but the way the engine works, would be a nontrivial change, and probably best saved for a future version instead of delaying this version yet more.

I hope that isn't too disappointing. I think the current system does have some advantages that will hopefully make up for it, though.