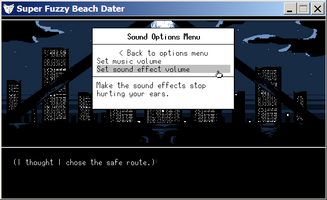 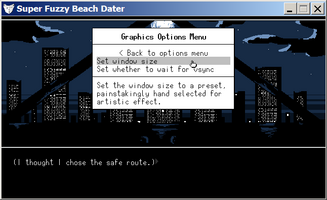 The settings system is pretty spartan, but working pretty similarly to the last demo now. This is one area in which I think I'm going to make some cuts to my original vision in order to get this release out in a reasonable amount of time.

One thing that's likely not going to make the cut is the ability to arbitrarily resize the game window, and to make the window fullscreen at arbitrary resolutions. This is currently coded to a degree, but is glitchy and counterintuitive, and fixing it involves refactoring the code more than I would like to do at the moment. As a result, currently, the only window controls or whether to display the graphics at 1X (360p), 2X (720p), or 3X (1080p), defaulting at 720p unless your monitor is too small for that, in which case it will fallback to 360p.

The lamest of the lame parts is that the volume controls are still done with a list of percentages instead of a slider. This is dumb, really dumb—but dumb in a way that, once you're done laughing, you'll still be able to change the volume fairly easily. So, if I have time, I will fix this, but I'm not going to let implementing volume sliders delay the release unnecessarily.

If either of these things are a dealbreaker for anyone, please comment :p

Next up is attempting to give the game a main menu and credits scenes. This is likely going to be more difficult, since the code is currently not designed to accommodate any non-gameplay scenes whatsoever, but I think it is also one of the most important thing for making the game look professional.